Martins For Turkey > Blog > WHO IS THIS MAN?

WHO IS THIS MAN?

Posted on June 1, 2016 Categories: Blog No comments yet 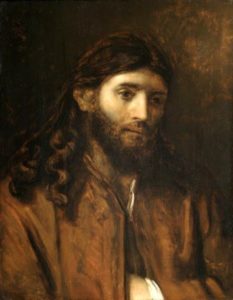 2 Corinthians 3:18  And we, who with unveiled faces all reflect the Lord’s glory, are being transformed into his likeness with ever-increasing glory, which comes from the Lord, who is the Spirit.

Christ was the perfect man, perfect in motives, thoughts, attitudes, values and behavior.  He didn’t just talk about how we should live, he lived that way.   He was sinless.  What does that mean?  Although he was tempted like any other person, he never gave into committing a sin.  Sin is what separates us from God, so Jesus always had perfect and perpetual communion with God.  If you want to know how God would think or act in a certain situation, look at the life of Jesus.

He was the perfect balance of each of the character traits which we have discussed in the book Christian Character: Remade in the Image of God.  He lived out what God is like, since he was God come in human flesh.  He was gentle and humble, even though he created the universe. (Matthew 11:29; Colossians 1:16)

His motive was always perfect love.  He never had mixed motives.  He never acted out of self-interest or self-defense or self-pity.  He perfectly loved his Father and the Holy Spirit, and he perfectly, completely and sincerely loved other people, even to the point of laying down his own life for them.  He was always patient and kind.  He never gave into envy.  He did not boast, but was perfectly humble. He was never rude; he was not easily angered; he kept no record of wrongs; he did not delight in evil but rejoiced with the truth; he always protected, trusted, hoped and persevered (1 Corinthians 13:4-7)  He was always joyful, peaceful, kind, good, faithful, gentle, and self-controlled.

His thinking, his teaching was always truth and nothing but the truth (John 14:6)  He never told a lie, since that would have been sin.  If you want to know what truth is, look at what Jesus said as recorded in Scripture (2 Timothy 3:16).  There was no confusion, distortion, exaggeration, or ignorance in what he thought or said.  He was straight-forward and did not hold back saying things out of fear, nor did he say anything out of impure motives.  He had no fear of the opinions of men.  He honored his father and mother and always honored God in everything he thought, said or did.

His behavior perfectly matched his teaching.  He never said one thing and did another.  He was always consistent.  He always acted in faith and always trusted the Father.  He was merciful, compassionate, and was concerned with the weak and helpless. He always walked with his Father and did exactly what his Father asked him to do (John 14:31).  He was the Father, who is perfect, made visible.  He and the Father were and are one. (John 1:18; 14:9)

The key words for Christ’s life are “never” and “always”.  We basically live lives of “seldom” or “usually” but he never sinned and always went around doing good to other people.  We can easily see that it is a good thing that we are being recreated into the image of Christ?  Christ was perfect in every way.  We are blessed not only to have a model, an ideal, a yardstick upon which to judge our own lives, but we are even more blessed that the Holy Spirit is at work in our own lives to transform us into that model or ideal.  God’s Holy Spirit is transforming us to Christ’s blueprint of perfection and we have the power of the Holy Spirit to enable what we are incapable of doing by ourselves.