The refugee ministry in Turkey

Overview of a Refugee Camp

In the fall of 2014 we met a Yazidi man who had immigrated to Tucson two years earlier in order to bring his family of wife and 8 children to live here. They were from Mosul, in northern Iraq. Hasan (not his real name) himself came to the U.S. in 2012 with the SIV (Special Immigration Visa) program because he was an interpreter for the U.S. Army in the Mosul area for 6 years, but his family couldn't come right away. ISIS began invading Iraq, systematically giving Christians 3 choices: convert to Islam, be beheaded, or pay the fine. Yazidis were only given 2 choices: convert to Islam or be beheaded. When ISIS attacked Mosul, the Peshmerga (the army protecting Mosul) ran away and did not support or protect the Yazidis. The only choice was to run. 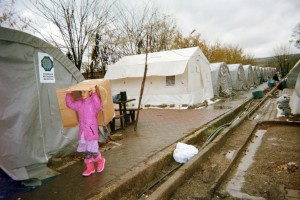 Hasan's wife returned to the house and grabbed their box of ID documents, but had no passports. In August, 300,000 Yazidis, Hasan's family included, were forced by ISIS from the Mosul area to Sinjar Mountain, where they were for 7 days without food or water. Along the way, about 4,000 Yazidis were slaughtered by the ISIS forces. The U.S. helicoptered in food and water for the refugees. A safe corridor was opened so that 200,000 Yazidis could escape through Syria, and eventually into Turkey. Hasan's family had tried to escape before this to Syria, but ISIS captured them. Miraculously, they escaped and went to Northern Syria. Hasan's family ended up in a refugee camp in the southeast part of Turkey. Now Hasan's wife and 5 children have made it safely to the U.S., but the rest of his family is still moving along the Refugee Highway, with some already settled in Germany.

The nature of the work with refugees is constantly changing. The camp in southeast Turkey has closed to outsiders, and we have shifted our focus to the camp near another city in eastern Turkey, where there are approximately 6,000 Kurmunji and Arabic speaking Syrian refugees living in open fields.

The "Refugee Highway" is a corridor of refugees who are fleeing death and persecution in Syria, Iraq and other countries who are going through Turkey into Greece and then into other countries in the European Union. As of the end of 2015 there were around 2-4 million Syrian refugees in Turkey seeking temporary residence, plus many others from Iraq and others escaping from countries where they have been persecuted.

Links to other websites