History of our involvement with refugees

In 1999, Frank and Caroline were introduced to several Iranian refugees who had sought asylum with the U.N. and were temporarily living in Turkey. The life of a refugee in Turkey is no picnic. If they are able to find work at all, they are paid minimal wages, live hand-to-mouth (often on the street) and are abused by employers and citizens. One such family, I will call them the Kamran family, consisted of a mom and dad, and two young teenage boys. The mom had gotten a job cleaning rooms in a hotel, and part of her pay was a basement room they were allowed to live in. She soon discovered that the owner had a reputation of getting young tourist girls drunk, then taking sexual advantage of them. A pretty Dutch girl checked into the hotel, and Mrs. Kamran warned her of the owner's plan. The girl fled. When the owner got word of what had happened, he beat Mrs. Ramran severely, and threw the family out of the hotel. Her husband felt honor bound to kill the owner, which was a natural response in Iranian society. He borrowed a gun from a friend and was saving money from his job washing cars to buy bullets. The family, who were now living in the park and completely broke, sat on a park bench when a man they knew from Iran walked up to them out of the blue and said, "Brother, I borrowed $500 from you in Iran, here it is." The Kamrans were so amazed at this 'coincidental meeting' that Mr. Kamran's nightly dreams of an 'angel' speaking to him flooded his awareness. He cried out to God to explain these curious circumstances to him, and again, that night dreamt of the angelic man who told him he must not kill the hotel owner, but instead forgive him, and that he too would be forgiven of his sins. Through many miraculous events over the next 2 weeks, the whole family came to know the 'angel' as Jesus, their Lord and Savior. 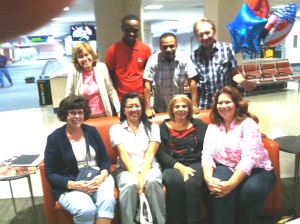 The Refugee Welcoming Group at the Airport

Our friend Cathie had introduced us to this family, along with another family and a single man. We knew the Lord had called us to sponsor all of them in the quest to attain UN refugee status and be invited to the U.S. to live. It took several years, and during those years, we were educated as to the severe circumstances that drive people from their homeland, perhaps never to see their families of origin again. They are often severely traumatized, and even though many are reached and become followers of Jesus, their healing, even after they are safely in a new country, takes many years.
It was in that context that Frank and I began a refugee life group at Pantano Christian Church. We have had the privilege of welcoming singles and families to Tucson with a group of loving volunteers. The refugee outreach group has ministered to Burundis, Iraqis, Karen, Somali, Iranian, Congolese, Burmese, and Nepalese over the last 10 years. Typically, this is at least a 3 month 'commitment', first meeting the family at the airport, escorting them to their apartment, giving them a welcome basket and a meal, then meeting with them to teach them how to shop in the U.S., take them to the library and doctor, befriend and encourage them as the acclimate to U.S. culture and begin to learn English.
We have gained many lasting relationships and our lives have been enriched by the culture and trust they have shared with us. Our goal is to introduce many Tucsonans to this wonderful opportunity and to see a greater percentage of incoming refugees have the experience of being embraced by those who exemplify the love of Jesus.

Mat 25:31-36 "When the Son of Man comes in his glory, and all the angels with him, he will sit on his throne in heavenly glory. All the nations will be gathered before him, and he will separate the people one from another as a shepherd separates the sheep from the goats. He will put the sheep on his right and the goats on his left. "Then the King will say to those on his right, ‘Come, you who are blessed by my Father; take your inheritance, the kingdom prepared for you since the creation of the world. For I was hungry and you gave me something to eat, I was thirsty and you gave me something to drink, I was a stranger and you invited me in, I needed clothes and you clothed me, I was sick and you looked after me, I was in prison and you came to visit me.’