Posted on February 3, 2020 Categories: Blog No comments yet 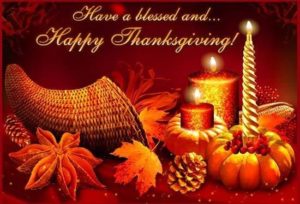 1 Thessalonians 5:18  give thanks in all circumstances, for this is God’s will for you in Christ Jesus.

When he was 7 years of age, his family was forced out of their home, and he went to work.  When he was 9, his mother died.  He lost his job as a store clerk when he was 20.  He wanted to go to law school, but he didn’t have the education.  At age 23 he went into debt to be a partner in a small store.  Three years later the business partner died, and the resulting debt took years to repay.

When he was 29, after courting a girl for four years, he asked her to marry him, and she turned him down.  On his third try he was elected to Congress, at age 37, but then failed to be re-elected.  He finally married, but then his son died at 4 years of age.  When this man was 45, he ran for the Senate and lost.  At age 47 he ran for the vice-presidency and lost.  But at age 51 he was elected president of the United States.

That man was Abraham Lincoln.  He established the annual celebration of Thanksgiving in the midst of the Civil War, in 1863,.  He had learned that it is perspective, not circumstances, that determines whether we overcome in this life.

Thanksgiving is not a matter of what has happened to you nearly as much as how you see what has happened to you.  It is the difference between the way an ox and an artist look at a meadow.  An artist looks at a meadow and sees the beautiful sky above, the emerald green of grass carpeting the floor, and a crystalline stream flowing through it.  He sees beauty.  An ox looks down and sees the next mouthful of grass.

Matthew Henry, a famous English Bible scholar, was once attacked by thieves and robbed of his wallet.  He wrote these words in his diary: “Let me be thankful.  First, I was never robbed before.  Second, although they took my purse, they didn’t take my life.  Third, although they took my all, it was not much.  Fourth, let me be thankful because it was I who was robbed and not I who did the robbing.”

We are not thankful because life has no difficult circumstances.  We are thankful because we have chosen to see life through a different lens – through God’s perspective. All of us have had and will have trials and tribulations; that is part of life.  However, we overcome through learning how to give thanks in all circumstances.  Our perspective determines whether we see life as just another mouthful of grass, or as part of God’s masterpiece.