Martins For Turkey > Blog > NOT AN OPTIMIST, BUT A SCULPTOR

NOT AN OPTIMIST, BUT A SCULPTOR

Posted on August 4, 2016 Categories: Blog No comments yet 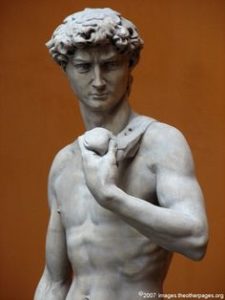 One of the greatest statues of all time is Michelangelo’s statue of David, sculpted between 1501 and 1504.  It stands 17 feet tall and was displayed originally in the Palazzo della Signoria in Florence, Italy.  The ability of Michelangelo to make such a beautiful statue out of a piece of marble is regarded as a masterpiece of Renaissance sculpture, but the ability of God to sculpt a new character out of a lump of clay like us is an absolute miracle.

Oswald Chambers said in his My Utmost for His Highest on August 4, “We tend to say that because a person has natural ability, he will make a good Christian.  It is not a matter of our equipment, but a matter of our poverty; not of what we bring with us, but of what God puts into us; not a matter of natural virtues, of strength of character, of knowledge, or of experience – all of that is of no avail in this concern.  The only thing of value is being taken into the compelling purpose of God and being made his friend.”

Jesus chose 11 ordinary men (12 initially) and transformed them into fearless disciples who took the Gospel to the whole world.  He started with lumps of clay and produced men who had character, purpose, conviction, and passion.  He began with clay and ended up with works of supernatural art.  When God looks at you, He doesn’t see what you are or what you have been, He sees what He can do with the raw material; He sees the completed product; He knows the power of His Word and Spirit to transform what is ordinary into what is extraordinary.  As Chambers said, it is a matter “not of what we bring with us, but of what God puts into us.”  You look at your heritage, your natural abilities, your education, your character, your experience, your accomplishments and it is hard for you to imagine what God has in store for you.

“No eye has seen, no ear has heard, no mind has conceived what God has prepared for those who love him” (1 Corinthians 2:9) God sees potential in us not because He is an optimist, but because He is a sculptor.  He doesn’t have blind hope in the human race, that we humans will turn out to be useful in the work of the Kingdom.  Rather, he knows His ability as a sculptor to make us into what He has designed us to be.  He looks at a slab of uncut marble and sees a beautiful statue.  He looks at a lump of clay and sees a beautiful vase.  He looks at a piece of driftwood and sees a gorgeous coffee table.  “The only thing of value is being taken into the compelling purpose of God and being made his friend.”

2 Corinthians 4:7 says,  “But we have this treasure in jars of clay to show that this all-surpassing power is from God and not from us.”  God chooses to use ordinary people to do extraordinary things in order to demonstrate his ability to turn jars of clay into treasures of His glory and power.  Allow God to sculpt you into what He designed you to be.  Allow Him to befriend you.